Clef is a signer and account management tool that is external to Geth. This means it can be run as a separate process or even on a separate machine to the one running Geth, for example on secure hardware that is not connected to any external network, or on secure virtual machines. This page describes how Clef can be used with Qubes OS to provide a more secure setup than a normal laptop. Using Clef with USBArmory hardware is also briefly described.

The Qubes operating system configures a set of virtual machines for different purposes such as:

The goal of this document is to describe how we can set up Clef to provide secure transaction signing from a vault vm, to another networked qube which runs Dapps.

Qubes provides a facility for inter-qubes communication via qrexec. A qube can request to make a cross-qube RPC request to another qube. The OS then asks the user if the call is permitted. 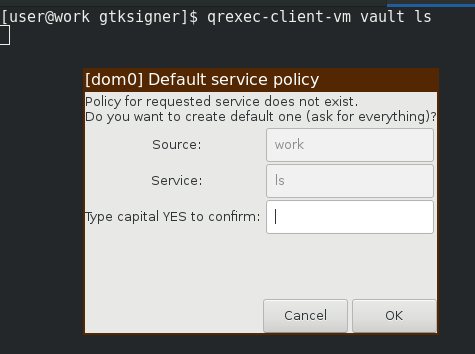 A policy-file can be created to allow such interaction. On the target domain, a service is invoked which can read the stdin from the client qube.

This is how Split GPG is implemented. Clef can be set up in the same way: 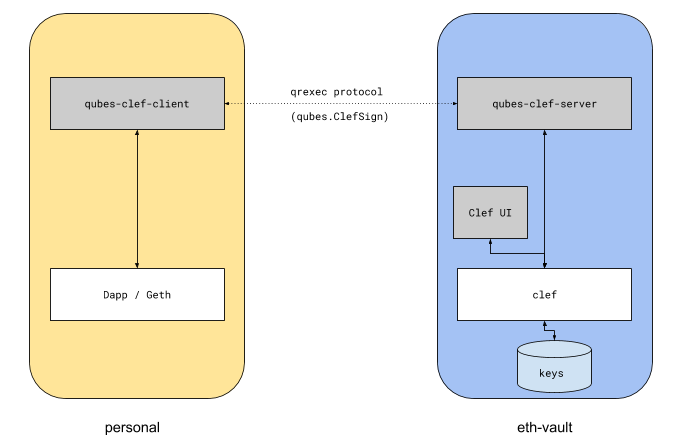 On the target qubes, we need to define the RPC service.

This RPC service is not complete (see notes about HTTP headers below), but works as a proof-of-concept. It will forward the data received on stdin (forwarded by the OS) to Clef's HTTP channel.

It would have been possible to send data directly to the /home/user/.clef/.clef.ipc socket via e.g nc -U /home/user/.clef/clef.ipc, but the reason for sending the request data over HTTP instead of IPC is for the ability to forward HTTP headers.

To enable the service:

This setup uses gtksigner, which is a very minimal GTK-based UI that works well with minimal requirements.

On the client qube, a listener is required to receive the request from the Dapp, and proxy it.

To test the flow, with debian-work as the target:

A dialog should pop up first to allow the IPC call:

Followed by a GTK-dialog to approve the operation: 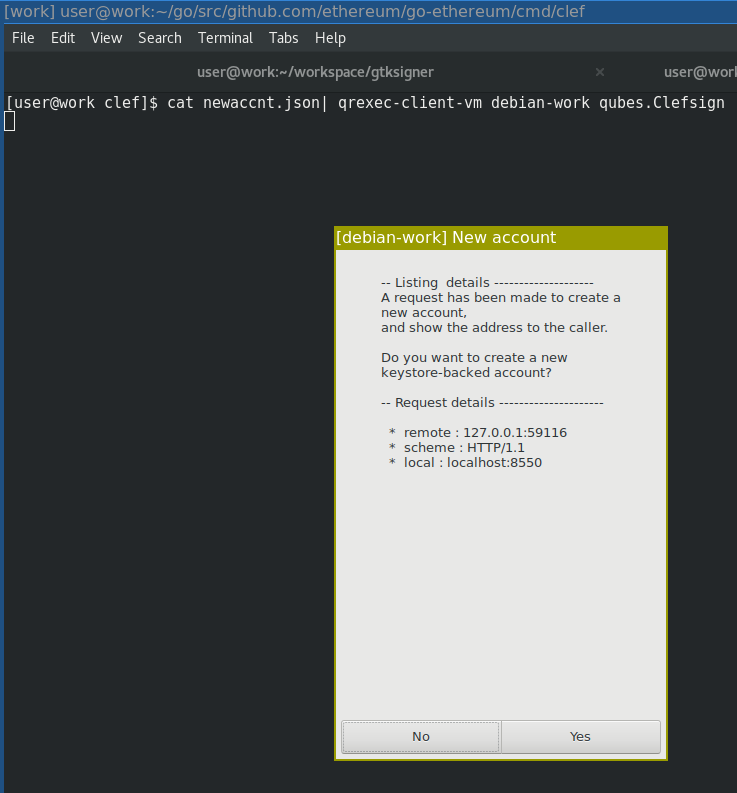 And it should show the same popups again.

The benefits of this setup are:

However, it comes with a couple of drawbacks:

The second way to set up Clef on a qubes system is to allow networking, and have Clef listen to a port which is accessible from other qubes.

The USB armory is an open source hardware design with an 800 MHz ARM processor. It is a pocket-sized computer. When inserted into a laptop, it identifies itself as a USB network interface, basically adding another network to your computer that can be used to SSH into the device.

Running Clef off a USB armory means that the armory can be used as a very versatile offline computer, which only ever connects to a local network between the local computer and the device itself.

Needless to say, while this model should be fairly secure against remote attacks, an attacker with physical access to the USB Armory would trivially be able to extract the contents of the device filesystem.

This page introduced two ways to setup Clef that give additional security compared to running on a normal laptop.